History of the Indian River Lagoon 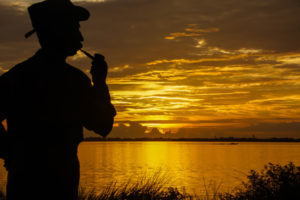 “Early settlers and Indians within the IRL watershed subsisted on the IRL to provide livelihood for food, transportation, commerce, and tools.  In the late 1800’s, the railroad system from Jacksonville to Miami was completed. The lagoon was already becoming established as a major area of commerce where tourism, fisheries, shipping, and agriculture flourished. Because of the degree of human activity and growth, it was necessary to alter the lagoon to fit the needs of the people at that time. Extensive drainage projects took place that would prepare land adjacent to the lagoon for future urban and agricultural development.” [Excerpted from ‘An Overview of the Indian River Lagoon‘, Keri A. Smith, U of F, Soil and Water Science Department] .

The Turning Point on the Indian River Lagoon…

December 7th 1941 will be “a day that will live in infamy” for the Indian River Lagoon and Florida’s east coast. With the coming of WWII and the Japanese attack on Pearl Harbor the United States government funded roads, bases and employment on Central Florida’s east coast. No longer was Henry Flagler’s Florida a resort destination, it was an employment opportunity for new residence. The real estate boom shortly started and the Indian River Lagoon would find itself being crossed by concrete modern bridges and bordered by roads, industry and residents. Brevard County would soon become the Space Coast and the Long Range Missile Test Range would become the Kennedy Space Center and men would be launched to walk on the moon from the shorelines of the once sleepy lagoon where Ais Indians fished and foraged two centuries earlier. [Excerpted from Captain Richard Bradley of Lagooner Fishing Guides© website.]

Decline of the Seagrass 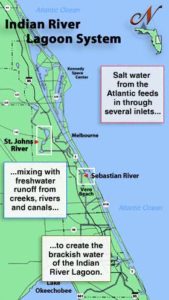 The Indian River Lagoon stretches 156 miles from Ponce De Leon Inlet in New Smyrna Beach in the north, to Jupiter Inlet near West Palm Beach to the south.  The Indian River Lagoon system includes Mosquito Lagoon, Banana River Lagoon, and Indian River. This is a unique and diverse system that connects Volusia, Brevard, Indian River, St. Lucie, and Martin counties. A large portion of the IRL system, 71% of its area and nearly half its length, is within Brevard County.

[Excerpted from ‘An Overview of the Indian River Lagoon’, Troy Rice, IRLNEP]

“The balance of this delicate ecosystem has been disturbed as development in the area
has led to harmful impacts. Stormwater runoff from urban and agricultural areas, wastewater
treatment facility discharges, septic systems, and excess fertilizer applications have led
to harmful levels of nutrients and sediments entering the lagoon. These pollutants create cloudy
conditions in the lagoon and feed algal blooms, both of which negatively affect the seagrass
community that provides habitat for much of the lagoon’s marine life. In addition, these pollutants
lead to muck accumulation, which releases (fluxes) nutrients and hydrogen sulfide, depletes
oxygen, and creates a lagoon bottom that is not hospitable to seagrass, shellfish, or other marine
life.

Efforts have been ongoing for decades to address these sources of pollution. Despite significant
load reductions, in the last five years, signs of human impact to the IRL system have been
magnified. In 2011, the “superbloom” occurred, an intense algal bloom in the Mosquito Lagoon,
Banana River Lagoon, and North IRL, as well as a secondary, less intense bloom in the Central
IRL. There have also been recurring brown tides; unusual mortalities of dolphins, manatees, and
shorebirds; and large fish kills due to low dissolved oxygen from decomposing algae.”

[Excerpted from Save Our Lagoon Project Plan ]

The Brevard Indian River Lagoon Coalition is a 501(c)(3) non-profit organization dedicated to educating our community regarding our precious Indian River Lagoon, and assembling the many allies of the lagoon throughout Brevard County to work together to save our lagoon.

We could use your help to help the lagoon.

The BIRLC was formed in the early 2000s as an informal organization to support and enable the community to push to enact the necessary fertilizer ordinances throughout all of Brevard County to help sustain the Indian River Lagoon.

With little to no attention or public outcry following the algal blooms in early 2016 that resulted in the March 2016 fish kill, Melbourne resident Spence Guerin led the efforts to establish a citizen-led coalition to save the Indian River Lagoon.