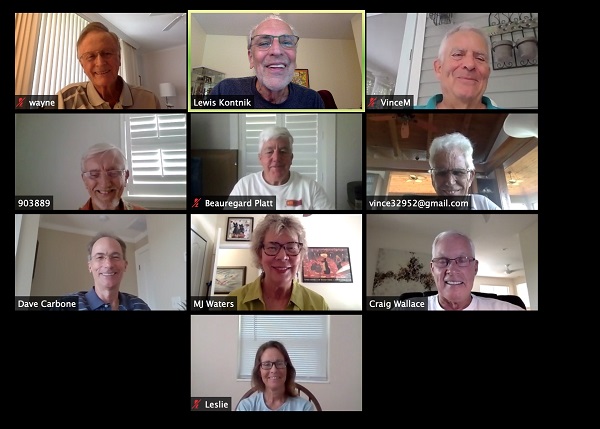 Vince Lamb is a Florida Native who has lived on the Southern tip of Merritt Island for 46 years.  After a long career in computer technology, Vince became increasingly active in environmental matters when he approached retirement in 2007.  His time has been divided between hands-on conservation activities like nesting sea turtle walks, Florida scrub jay and red-cockaded woodpecker recovery projects and paddling Florida’s waters, as well as environmental advocacy activities such as leading the Political Action Committee to promote passage of the half-cent sales tax to protects and restore the Indian River Lagoon.

Vince served as Chairman of the Florida Wildflower Foundation and a founding board member of the Friends of the Carr Refuge.  When the Indian River Lagoon National Estuary Program was reorganized in 2015, he was asked to join the Management Board.  Additionally, Vince serves as a Director of the St Johns Riverkeeper and has helped to organize the Headwaters Advisory Council for this Riverkeeper.  He has served on the board of the Brevard Indian River Lagoon Coalition since its founding and now serves as Chair.  In early 2019, Vince was elected to the board of the Brevard Zoo and serves actively on the Aquarium Task Force that is planning an aquarium and lagoon conservation center at Port Canaveral.

Bo took a circuitous route to his current status as lover of the lagoon. He grew up near Ballard Park in what was Eau Gallie in the 1950s and 1960s. During those years he was known by neighbors and friends as either a "river rat" or a "surf bum" because of his love of Brevard's beaches and the Indian River. Some financial issues took Bo away from Florida in 1970, but he vowed to return to the lagoon - and he reached that goal in 2013. Upon returning to the lagoon, his first words were unprintable. He decided to become involved in addressing the lagoon's problems and became a founding member of the lagoon coalition, working to pass the 1/2 cent lagoon sales tax among other things. Bo and his wife Catherine are involved in a number of local environmental and political organizations and live on the Eau Gallie harbor, about a half mile from his childhood home.

Dave Carbone is a seasoned financial executive with over 40 years of experience in leadership roles in the public, private and non-profit sectors.  Dave has served as Board Chair for Community Gatepath, the largest non-profit in San Mateo County, California, dedicated to enabling individuals with disabilities.

Since relocating to Florida in 2004, Dave is a passionate fly fisherman on the sand flats of the Indian River Lagoon.  He is dedicated to restoring the status of the pristine nature sanctuary to once again support the abundance of native species and quality of life for surrounding residents and visitors.  Dave practices as a financial consultant and is a CPA in the state of NY.

Rick has spent 40 yrs in Real Estate and understands the significance of a clean lagoon to help maintain property values.  His strong desire to improve the environment, and the lagoon in particular led him to join the Coalition.  As a local sailor, he has been a strong advocate to help identify and fix issues of boaters polluting the lagoon.

MJ Waters, former Coalition Chair and lifelong conservationist and advocate, spent 17 years in corporate communications at the Walt Disney Company. During her decades in Brevard, she launched her own consulting company, co-founded two non-profit groups and served on many business and charitable boards.

Lew has focused on the improving the environment most of his life.  He earned a MS in Environmental Engineering, and a J.D. practicing Environmental Law in Washington, DC.

Current Chair of Ocean Research and Conservation Assn., Former Chair Chesapeake Bay Foundation, continues on as an honorary board member.

Since the Brown tide induced fish kill of 2016, Craig has been actively working with the Brevard Zoo's Restore Our Shores program, the Marine Resource Council, Keep Brevard Beautiful, Brevard County SOIRL Citizens Oversight Committee, UF/IFAS, and Florida Tech Marine Sciences in various volunteer and educational programs. These experiences eventually lead him to join The BIRL Coalition as the Partner Liason working to enhance the impact of Brevard’s amazing Lagoon NPOs.