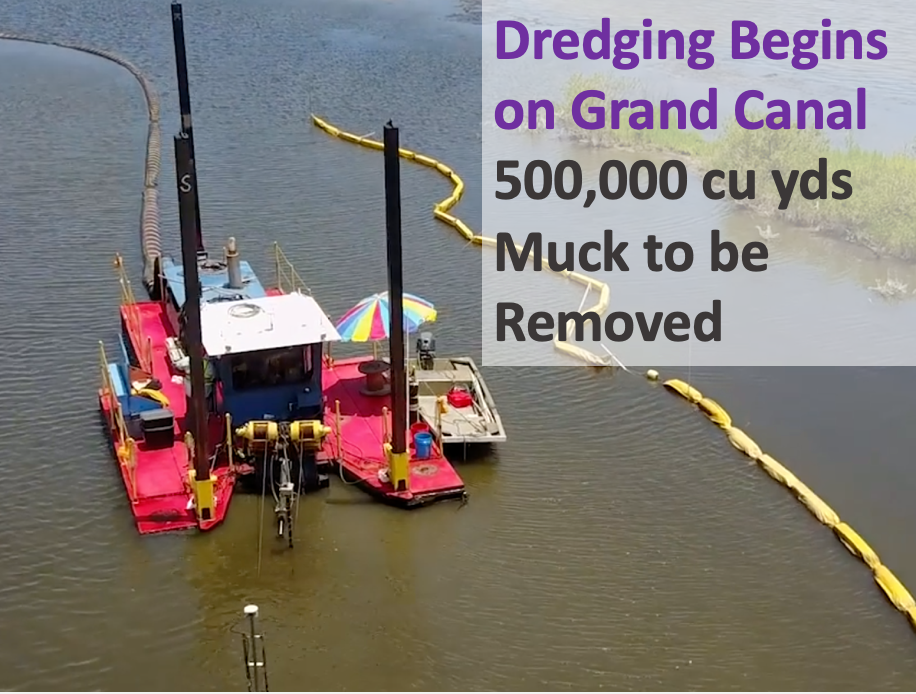 BREVARD COUNTY, FL. – Nearly 500,000 cubic yards of muck will be removed from the Grand Canal as part of a $27 million Indian River Lagoon restoration project that is slated to begin dredging this week and is expected to take four years to complete.

The project entails hydraulic dredging of the Grand Canal system from Pineda Causeway south to the north end of Samson Island. Work includes muck removal from entrance canals entering from the Banana River and residential finger canals but excludes the canal between Port Royal Boulevard and St. Georges Court, which may occur later but not currently included due to manatee protections.

As part of this project the County has conducted sediment sampling in 2015, 2018, and 2019. These samples were tested for chemical constituents often found in dredged sediment plus a large suite of atypical analytes selected due to proximity to the military dump located in South Patrick Shores. Test results support moving forward with dredging. The County has also developed a rigorous sediment sampling plan that will continue throughout the duration of the project.

All of the canals within the Grand Canal Muck Removal Project Area have been investigated and determined to contain a significant amount of muck. Muck is considered a legacy load caused by decades of stormwater runoff, wastewater treatment facility discharges, septic system drain fields, and excess fertilizer applications. Muck is material on the bottom of the lagoon that contains fine-grained organic material; creates large areas that are not hospitable to seagrass, shellfish or other marine life; releases large amounts of hydrogen sulfide and nutrients into the water column that contribute to harmful algal blooms; creates turbid conditions that negatively affects seagrass growth and the benthic communities that it supports; and depletes oxygen in the water column that can result in fish kills.

The project is funded primarily through a Save Our Indian River Lagoon (SOIRL) 10-year half-cent sales tax approved by Brevard County voters in 2016, but also about $9 million in grant funds approved by the Florida Legislature for muck removal.  While the work is anticipated to begin this week, dredging is expected to continue intermittently through spring 2023 due to seasonal manatee closures required by regulatory agencies.

The contracted muck removal will entail an auger-head and vacuum-style (hydraulic) dredge. Here’s how it works:

The SOIRL half-cent sales tax has included other dredging projects that have either already been completed, are under way or are currently in the bid and/or permitting stages. They include:

The Brevard Indian River Lagoon Coalition is a 501(c)(3) non-profit organization dedicated to educating our community regarding our precious Indian River Lagoon, and assembling the many allies of the lagoon throughout Brevard County to work together to save our lagoon.

We could use your help to help the lagoon.